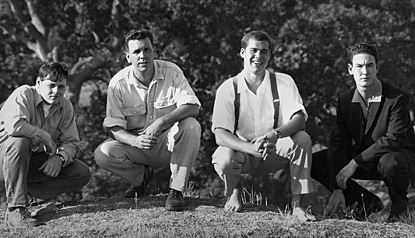 In the mid 1990s, Rod was a member of a rock and roll band called The Lawsons (later renamed Bindlestiffs). Named in honor of Floyd Lawson, the barber on The Andy Griffith Show, the band was led by singer, songwriter and guitarist Danny Croidhe, lead guitarist Steve Blanchette, bassist Mark Franz and drummer Rod Diridon.

Danny Croidhe (pronounced Cree) was the primary creative force behind the Lawsons/Bindlestiffs. His Beatles and new-rock influenced melodic tunes were strongly influenced by Steve’s own special brand of Neil Young-inspired musical genius to create some great tunes.

“Mark was a really solid, intuitive musician, and a great basist” said Rod, “He definitely drove the rhythm section. I was the only non-musician in the band. I had decent hand-eye coordination, so they let me play the drums. They’re all great guys, and I miss Danny.”

The band had existed prior to and well after Rod, with his stint at the tomms from 1994 – 1996. See below to download a few of the Lawsons tunes:

Steve, his wife Pheobe and their kids now live in Central California. He continues to compose and play music with his wife and kids. Mark, his wife Grace and their kids live in Santa Clara County. He is now a firefighter and he and Grace collect vintage automobiles.

Some years after the band broke up, Danny Croidhe died of heart complications, a few months short of his 40th birthday (see www.dannycroidhe.com). You can also hear more of his music, and the KSCU tribute to Danny at www.dannycroidhe.com/music. Danny is survived by his family, his mother Linda, and missed by many good friends. His music should be celebrated and his passing (and that of the music still to come) mourned as a loss by us all.